This page has been archived and is no longer being updated regularly. 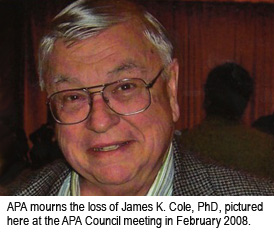 Among his mental health and humanitarian advocacy, Dr. Cole was center stage in a protracted battle against the Nebraska Catholic Conference’s (NCC) effort to change state regulations surrounding the referral of clients and potential clients. Dr. Cole told the PracticeUpdate in October 2009 that the NCC’s proposal to remove “sexual orientation” from regulations, or to allow counselors to claim a moral exemption, “focuses primarily on excluding gay clients from receiving behavioral health services.” Cole testified before the NPA Board of Directors, of which he was a member, against the proposal.

Dr. Cole’s research areas included dispositional assessment, clinical neuropsychology, forensic psychology and human sexuality. Among his numerous awards were NPA’s Teaching Award and Psychologist of the Year Award. In addition, The NPA created the James K. Cole Lifetime Achievement Award in his honor; Cole was the award’s first recipient in 2009.